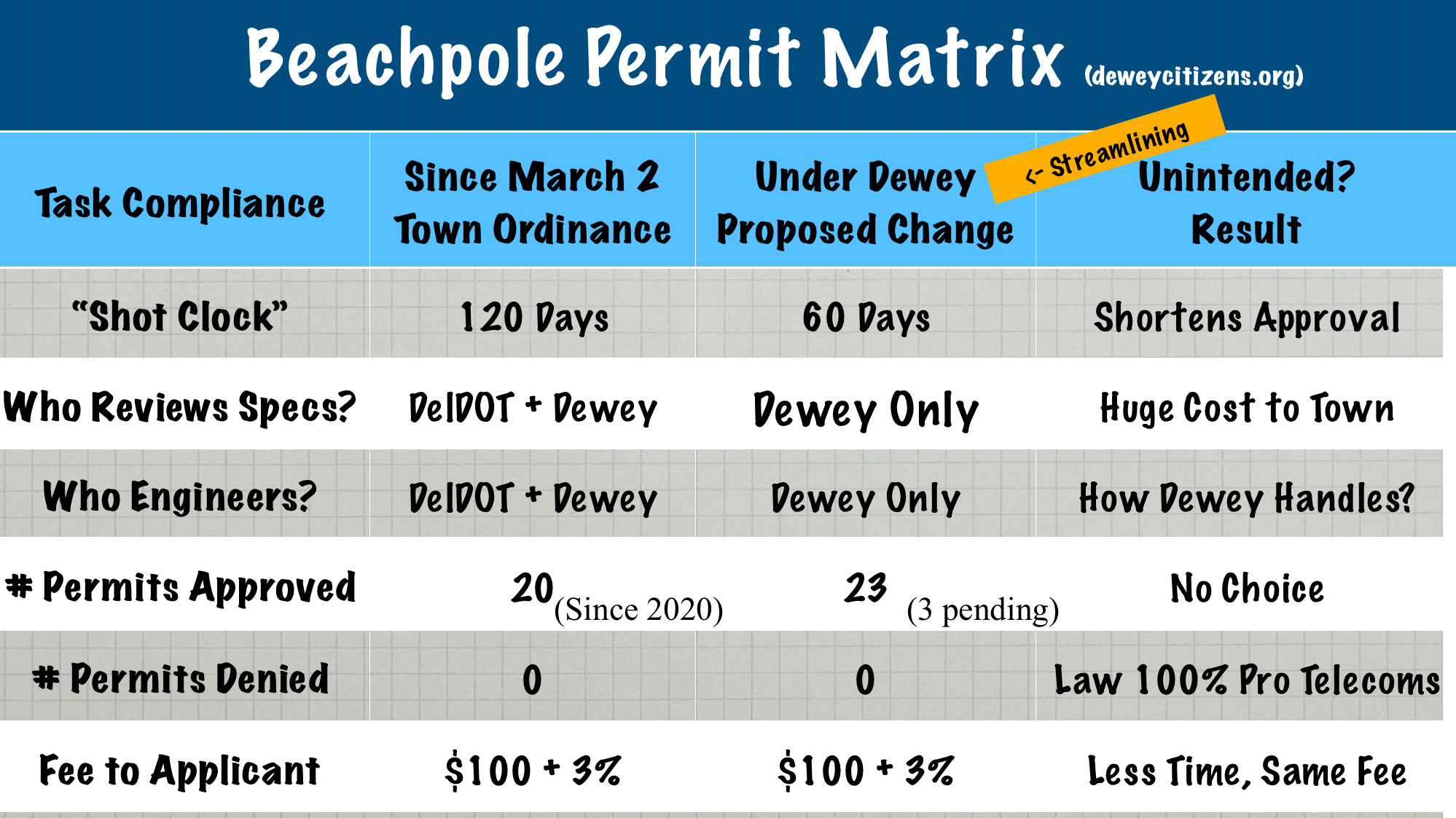 State permit still required for Route 1 and Route 1A

Despite resident opposition, Dewey Beach commissioners voted unanimously March 22 to revise an agreement with the state they say will give the town sole authority over permitting the installation of wireless infrastructure.

The amendment to the town’s 1983 street and beach maintenance agreement with Delaware Department of Transportation would take DelDOT out of the permitting process, commissioners said, except for rights of way on and adjacent to Routes 1 and 1A, which would still require a permit from the state.

Commissioner Gary Persinger said the original agreement ceded maintenance responsibility of the town, except a couple streets, to DelDOT. He said the agreement’s new definition of beach lands is unclear.

“It's not characterized in terms of right of way,” Persinger said. “It does talk about an eight-foot section from the end of the pavement eastward, but it doesn't really define what that is. The practical effect may be to designate that as right of way, but it's not clear.”

The revised agreement defines beach lands as areas bounded to the east by the Atlantic Ocean and to the west by a line eight feet beyond the easternmost edge of the paved road, regardless of whether it is above the surface of the land or buried by sand and/or soil.

By passing an ordinance and design standards, the town has asserted its ability to regulate, Persinger said, and it wasn’t clear that signing an agreement giving the town sole permitting authority would actually increase its authority.

During public comment, residents urged commissioners not to vote for the agreement.

“It's an attempt to paper over a situation which actually would give the town the ability to not move forward with those particular poles,” said homeowner Luis Debaca. “It seems strange to me that we would actually create the legal impediment to doing the right thing, at least on the few streets we’re able to.”

“Why is the town even considering allowing placement of the poles outside the right of way, which further clutters the landscape?” he asked. “What benefit to the town and residents is there? Why give these companies more areas to plant poles when we don't want any of them in the first place?”

DelDOT representative Eric Cimo said the original agreement set up DelDOT’s maintenance responsibility in Dewey, but didn’t define beach lands. The amendment will carry the eight-foot offset from the edge of pavement on the roadside to the end of the street, he said.

The intent of the amendment is to give Dewey sole permitting authority even within Del-DOT’s maintenance areas when it comes to wireless facilities, Cimo said. Delaware Department of Natural Resources and Environmental Control could still assert authority, Cimo said, and permits already granted can’t be rescinded.

Commissioner David Jasinski said the language regarding eight feet at end of roads is unclear, but what is clear is that the most objectionable poles have been installed or permitted in the same area. He motioned to have the town manager and town solicitor modify the agreement to exclude the extension of DelDOT’s right of way and maintenance by eight feet east and west of the pavement and to include other recommendations by the town solicitor. The eight-foot issue could negatively affect the town, he said.

Persinger seconded the motion, stating it was not in town’s best interest to sign the amendment as is. Commissioner Paul Bauer said the beach lands definition needs to be clarified and he would rather the town have more permitting control than less.

Commissioner Bill Stevens said the agreement would resolve inconsistencies with DelDOT. Mayor Dale Cooke said he didn’t think that DNREC or state representatives intended any harm to the town.

“I think we went deeper into the weeds and found more issues that we feel are negative right now for the town,” Cooke said.

Property owner Jeffrey Smith said taking DelDOT out of the permit approval process only streamlines approvals for wireless carriers. He said the town has control now, but still has no authority to deny permits. He said he had to jump through more hoops to install his deck than carriers will have in order to install wireless facilities.

After the vote, Town Manager Bill Zolper said the town is not losing anything by having Del-DOT grant permits. He proposed hiring a consultant to help with the town’s legal issues regarding wireless facilities; a possible vote to approve Johnson, Miriam & Thompson is listed on the commissioners’ March 30 agenda.

Cooke said the current agreement is unchanged; the town attorney and town manager will revise it until coming to an agreement with DelDOT.

voted unanimously March 22 to revise an agreement with the state they say will give the town sole authority over permitting the installation of wireless infrastructure.

free template joomla
Back to top